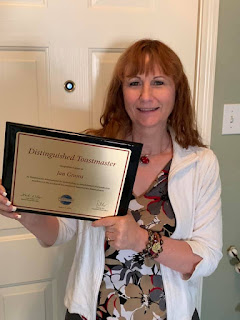 Jan Grams, a member of Toastmasters since December 2015, earned her Distinguished Toastmaster Award in August.

Congratulations, Jan!
Posted by Tracy Thomason at 11:07 PM No comments:

The Lubbock Professional Club invited members from all across Division F to an awards ceremony on Saturday, June 1, 2019.

During the ceremony, members who earned an educational award of a Competent Communicator or Pathways Level 3 (or higher) between July 1, 2018, to May 31, 2019, were recognized for their achievement.

Posted by Tracy Thomason at 12:09 PM No comments:

Two Lubbock residents and members of local Toastmasters clubs were honored for their service to Toastmasters International on May 18, 2019, during the District 23 Conference in Santa Fe, New Mexico.

Kim Davis, an employee of Mosaic and a member of the Toasters Club, received the Division Director of the Year award for the 2017-2018 program year. Kim served the district as the Division F Director and supported clubs in Lubbock, Hobbs, Portales, Clovis, Lovington, Midland, Odessa, and Fort Stockton. She set up trainings, organized speaking contests, and helped grow new clubs. In addition, she acted as the conference chair for the 2018 conference in Lubbock.

"I was honored to receive this award and honored to serve with a great group of Area Directors who really made this award possible," said Davis. "It was my great privilege to lead Division F in the 2017-18 Toastmasters year."

Tracy Thomason, an employee of Providence Health and Services and a member of the Toasters Club, Lubbock Club, and Lubbock Professional Club, received the Robert E. Barnhill III Compañero award for the 2017-18 program year. This award is given to a past district officer who has continued to serve the district and the organization. Tracy served as an advisor to the district leaders, helped struggling clubs, developed marketing campaigns, and assisted with trainings. Tracy is also a current member of the Toastmasters International Board of Directors.

"I am deeply honored to receive this award which was named for one of my mentors, Bob Barnhill," said Thomason. "Bob meant the world to me and I am honored to carry on his work of supporting Toastmasters International."

District 23 supports nearly 100 clubs across New Mexico, the Oklahoma Panhandle, and the western third of Texas. Lubbock as eleven clubs which meet at different times, different days, and different locations across the city. You can find all of them on our Find a Club page.

Posted by Tracy Thomason at 2:31 PM No comments: 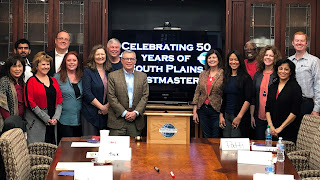 Chartered in late 1968, the club is always among the largest clubs in Lubbock, They meet every Thursday at noon in the Lubbock National Bank boardroom at 1001 Main Street, Lubbock, Texas.

Long-time members Kyle Short and Larry Doss shared their Toastmasters experiences with the group as they look forward to their next 50 years.
Posted by Tracy Thomason at 11:07 AM No comments:

Toastmasters International awarded Division F Toastmasters, which includes clubs in Lubbock, Clovis, Portales, Midland, Odessa, Hobbs, and Fort Stockton, Select Distinguished Status for the July 2017 to June 2018 year. This level of award is given for exceptional work in the areas of membership growth, club growth, and education.

The Division F Director for this term was Kim Davis of Lubbock. Kim is a long-time Toastmaster and a member of several local clubs including the Toasters Club, Lubbock Club, and Lubbock Professional Club. She led a team of five Area Directors including three from Lubbock, one from Hobbs, and one from Odessa to assist the 25 clubs in the Division. During this period, Davis and her team helped develop three additional clubs in the Division.

District 23 is home to 1400 Toastmasters and 101 clubs, all of whom are served by 40 district officers. More information about the District and Toastmasters is available at www.District23.org.